History of the Waler

In 1788, the first fleet of eleven ships to Australia brought with it one stallion, two colts and four mares from the Cape of Good Hope. They were generally thought to be Barb horses. Later ships, such as the Britannia, which landed in 1795, brought a further thirty three Cape horses. The increasing demand in the fledgling colony for saddle and work horses led to migration of notable breeds such as the Thoroughbred, Clydesdale, Suffolk Punch, Cleveland Bay, Lincolnshire trotter, Norfolk Roadster, Yorkshire Coacher, Hackney, Timor pony, Arabian, Percheron and native British ponies.

From the outset of European settlement it was realised horses were needed that could meet the demands of this tough country. All horses that reached Australian shores had already undergone a tough sea voyage and many horses died along the way.

From those survivors, the foundation of a uniquely Australian Colonial horse was established.

The practice of cross-breeding the small number of breeds available in Australia at the time resulted in a versatile work horse with good weight carrying capabilities, speed, endurance and the ability to thrive on the native pastures.

Successive Governors encouraged the breeding of horses to meet the needs of transport and communications in the developing colony.  Soon, owners of large properties were to breed these colonial horses by the thousands not only for the domestic needs but for what became a lucrative export trade in remounts, initially to the British Army in India.  Strict standards of conformation and temperament were monitored by breeders for the fastidious remount horse agents.

These colonial bred horses became known as the “Waler”, a term coined by the British in India given to those horses that were bred in the colony of New South Wales.

TA Coghlan, who became the government statistician in 1886, wrote:-
“The colony is specially adapted for the breeding of saddle and light harness horses and it is doubtful where these particular breeds of Australian horses are anywhere surpassed. The bush horse is hardy and swift and capable of making very long and rapid journeys when fed only on the ordinary herbage of the country: and in times of drought, when grass and water have become scanty, these animals often perform astonishing feats of endurance” (Wealth and Progress of NSW 1884, p348).

Walers were used overseas as remounts for the cavalry, as artillery horses, and as carriage and sport horses for both the British Army and the Raj in India.  By 1867, the Waler was regarded by the British as amongst the finest cavalry horse in the world.  Horses were exported from the colony as early as 1816 through private sales and the flourishing remount trade which ran from the 1830s till the 1960s. 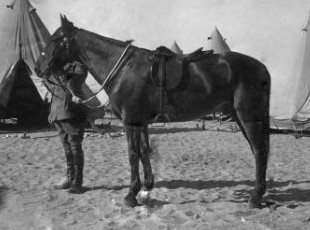 Walers were supplied to the Australian army for the Boer War, where mounted on their strong robust Walers, the Australians established an enviable reputation for their horses and their horsemanship.  Later in WWI, the Waler became legendary with the Australian Light Horse for their feats of endurance and courage in the desert campaigns and later in France.

During WWI, about 160,000 horses were sent overseas. The Light Horse proved themselves with feats of endurance and bravery in the sands of the Middle East.  One of the most courageous and internationally recognised charges was that of the 4th and 12th Regiments at Beersheba on 31 October 1917, where after a full night’s march and a day’s fighting with no water, they galloped across a burning plain at the entrenched and heavily armed Turks, winning the day and the water wells of Beersheba.  A monument was erected in Sydney by returned soldiers who due to quarantine and army economies had to leave their mounts behind.  It has the inscription “by members of the Desert Mounted Corps and friends, to the gallant horses who carried them over the Sinai Desert into Palestine, 1915-19.They suffered wounds, thirst, hunger and weariness almost beyond endurance, but they never failed. They did not come home.”

Again Walers were supplied to the Army during WWII for use by the secret North Australia Observer Unit who carried out surveillance of the remote northern coastline.  A small number also went with the army to Papua New Guinea and to Burma.  However, during this time mechanisation had begun to supersede horses both in the army and in general usage throughout the country.

At home Walers proved the ideal utility and stockhorse also being used by the mounted police.  However, with phasing out of the remount trade in the 1940’s and the onset of mechanization, commercial breeding of Walers rapidly declined.  Some breeders destroyed their stock but others simply abandoned them to run free on their station properties. By the 1960’s, the Waler had virtually disappeared from the domestic scene, with recreational and competition riders favouring more refined imported purebred horse such as Thoroughbred, Arab, European Warmbloods and Quarter horses rather than the old fashioned heavier boned colonial breed with no studbook.  The Waler, once lauded to be one of the greatest cavalry horses in history, became an anachronism and almost became extinct.

*These figures are from:- M. Kennedy’s – University of Melbourne 1986 Thesis – The Role & Significance of Bullocks & Horses in the Development of Eastern Australia Appendix “J”.